‘To see your son on a slab in a mortuary…’

‘To see your son on a slab in a mortuary… His hair was so soft, he looked like he was just sleeping’ – HHT founder Dara Woods

Dara Woods and her children were born with a disease that often goes undiagnosed, in spite of unexplained bleeds. She tells Joy Orpen it’s crucial those affected are made aware of the condition so lives can be saved

One day in 1983, David Woods inadvertently spilled a pint of Guinness all over a pretty young woman from Donegal who happened to be visiting Clontarf Castle that day. “He apologised profusely and immediately bought me a drink,” recalls Dara- the victim of the frothy dousing. “I was smitten there and then.” That somewhat comical event would herald the beginning of a deeply caring relationship that would bring much joy but also unbearable sadness for the couple.

In time, David, a maths and physics teacher, and Dara, a credit controller, married and bought a house in Swords. They were content, even though there was a health issue relentlessly yapping at Dara’s heels — she suffered constant nosebleeds. “I come from a family of nose-bleeders,” says Dara. “Living with them as a child was pretty routine. You just wiped your nose on your sleeve and got on with it. However, my dad would lose blood very rapidly, so he was transfusion dependent. He died at 68 from complications of his condition.”

The bleeds also made Dara’s two pregnancies more difficult. She would take a container when she was travelling by car in case she had a “blood vomit”. And sometimes she required medical interventions. “I’d end up in hospital having cauterisation of the nose — which, it transpired, was the worst possible solution, as it can cause permanent damage to the septum,” she says.

Nonetheless, in spite of all the problems, her son, Paul, was born in 1989, followed two years later by his sister, Katie. Both children were also prone to unexplained nosebleeds. Then in 2003, their grandfather saw Mike Nolan and consultant radiologist Dr Adrian Brady being interviewed on The Late Late Show. Mike was the father of nine-year-old Grace, who had died from hereditary haemorrhagic telangiectasia (HHT), a rare genetic disorder.

In essence, this condition causes abnormalities in certain blood vessels (arterio-venous malformations or AVMs) which may lead to bleeding in the nose, lungs, brain, spinal cord, gut and/or liver. The most common symptom is nosebleeds. AVMs may require surgical or interventional radiological treatment. In very rare cases, serious complications may arise.

Many of the symptoms described in the television interview were familiar to the children’s grandfather, so he urged Dara to have them assessed in the newly founded HHT Centre at Mercy University Hospital (MUH) in Cork. By then,

Dr Robert (Bob) White (Yale University School of Medicine) who was a leading expert on HHT, had already been invited to visit the centre.

In the meantime, Dara took the children to Cork; they were the centre’s very first patients. “We each had a CT (computed tomography) of the lung, and an MRI (magnetic resonance imaging)of the brain, as well as genetic blood testing,” says Dara. HHT was indeed found to be the cause of the family’s problems. While there was a 50pc chance that each child could be born with it, it transpired that unfortunately both Paul and Katie had inherited the condition.

“Yes, two out of two; they were bleeders,” says Dara ruefully. “However, while none of us had it in the brain, Paul’s lungs were found to be affected by HHT. He asked his father if he was going to die from this, and David said, ‘No’. We thought that by being proactive and getting on the database, we were all going to be fine.”

They were informed that Dr White would be arriving 10 days later to train Dr Brady in an interventional radiological technique for dealing with HHT in the lungs. “Instead of invasively opening up the lungs, he fed a line through the groin up to the lungs to embolise the bleeding points,” explains Dara. “This is now a run-of-the-mill procedure. After Paul had it done, his teachers noticed a great improvement in him; he had much more life and energy.”

Paul had to return to the centre for check-ups. As time went on, the bleeding points in his lungs became more aggressive, so he required ongoing specialised treatments. But none of that prevented him from successfully studying environmental science at Dublin City University(DCU).

As the summer of 2012 blossomed, he took his girlfriend Karen to Paris, his favourite city. In the very early hours of June 8, all hell broke loose when Paul, who’d been immersed in his book, suddenly keeled over. Karen immediately called the emergency services, and then his family in Ireland.

At that time, Katie was in Granada, in Spain; Dara was in Galway, while David was at home. So they all began making frantic efforts to get to Paris. But it was all in vain; Paul was already lost to them. It later transpired that a blood vessel in his lungs had catastrophically ruptured. “We were told that that was a very, very unusual event,” explains Dara.

As it happened, David was alone when he got a call from the hospital in Paris, asking if the family would consent to the donation of Paul’s organs. Somehow, even though he was in deep shock and totally traumatised, David found the strength to agree. It’s a decision none of them regret.

Having arrived in Paris, David and Dara were taken to the mortuary to identify their beloved boy. “To see your son on a slab in a mortuary is…” And here Dara’s voice trails off, as tears gather in her blue eyes. “His hair was so soft, he looked like he was just sleeping.”

It took four days to get Paul back to Ireland (with the help of Irish embassy staff). In the meantime, Dara’s mother had taken up residence in Dublin, which meant that while they were in Paris, Paul’s friends could gather in his home to reminisce about the great times they’d had with this bright, funny, loving, handsome young man. “To this day, they still come on Christmas night to share stories and to remember Paul,” says Dara. “It helps us all, especially Katie, who is now a translator and interpreter in Spain.”

Dara says there are about 1,000 people with HHT in Ireland, but less than half of them have been diagnosed. She says the most obvious symptom is nosebleeds which are recurrent and unexplained.

Following their very sad loss, Dara and David set up HHT Ireland, so that affected families can be better supported. They have also forged links with Rare Diseases Ireland and Rare Diseases Europe, (EURORDIS) an alliance of organisations from 70 countries.

Surely a fitting tribute to their beloved Paul.

For more information about HHT, contact HHT Ireland, which will be hosting an awareness day on March 23, see hhtireland.org 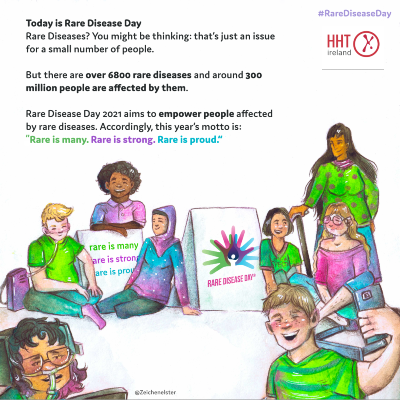 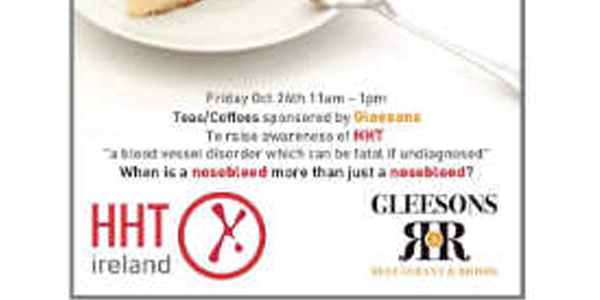