What’s the difference between a sign and a symptom?

These two words are synonyms and they refer to evidence that something’s not quite right with your body. Yet, medically speaking there is a difference between them.

A sign is external evidence that can be recognised by the patient, physician, nurse, or someone else.

Signs are seen and read by someone rather than felt. They are indicators of a problem.

A symptom is a medical term explaining a condition being internally experienced by the patient.

Symptoms can only be described by the person feeling them.

A sign is something that can be observed externally, while a symptom is felt internally.

The Signs of HHT:

You will find here many signs & symptoms which indicates underlying HHT conditions. If you recognise one or several of these signs & symptoms, perhaps it’s time to have the conversation of HHT with your doctor. 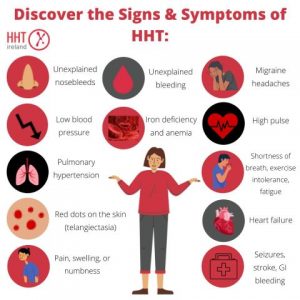 The Symptoms of HHT

HHT, also known as Osler-Weber-Rendu Syndrome, may manifest differently among different families, and even in different people within the same family.

Very often, patients may not experience any alarming symptoms until adulthood. This makes the disorder very difficult to diagnose.

It is believed 9 in 10 patients suffering from HHT go undiagnosed.

The age when people begin having HHT symptoms varies. About 95% of people with the gene for HHT will eventually develop signs or symptoms of HHT, usually by the age of 40. However, just because a person reaches the age of 50 without symptoms of HHT does not mean that they are not affected.

Being aware of the possible symptoms of HHT helps both the patient and Doctor recognise the condition and work towards accurate treatment. Please find a list below of the symptoms most commonly experienced by HHT patients.

The most common HHT signs & symptoms include:

Nose – Greater than 90% of people with HHT have unexplained & recurrent nosebleeds which can range from mild to very severe.

Heart – High heart rate and/or high blood pressure can be caused by the presence of AVMs in the lungs. Heart failure is another symptom experienced by patients – which can be caused by AVMs present in the liver.

Brain – Seizures of the brain are symptoms caused by brain AVM.

Liver – The most common symptom of AVMs in the liver is high output cardiac failure (HOCF) with secondary pulmonary hypertension. Other symptoms include arterio-portal or veno-portal shunt, leading to portal hypertension syndrome with or without hepatic encephalopathy or biliary tree ischemic necrosis. Liver Cirrhosis is another symptom experienced by patients and caused by liver avms.

Skin – Visible telangiectases often occur on the fingertips, lips, and tongue. They look like small red dots sitting under the skin. When you put pressure on them, they turn white since pressure prevents the high-flow blood from moving through the malformation. They can be painful to touch for many patients and in others they do not cause pain.